The boxy Dodge Colt I permanently borrowed from Dad had decided to stall, often. Stop at a red light or press the brakes—stall.

“Alternator,” Dad mumbled into the phone. “Or spark plugs. Bring it by. I’ll take a look.”

At twenty years old, I needed wheels for college and work. And weekends full of parties with beer bongs and lines of cocaine. It was the 80s, and I had places to go—always. I had driven that car into the ground, discovering it wasn’t a Timex. I regretted that abuse. But Dad could fix it. He could fix anything.

Driving fourteen miles to his house would be tricky. I planned it out.  A cool 40 miles an hour in the slow lane on the freeway would work as long as I kept a steady foot on the accelerator while burning the clutch. After a push start, off I went—Westbound on the 91-Fwy from my apartment in Orange, traveling at dusk. I questioned, did I need headlights? Would the lights tax the alternator? 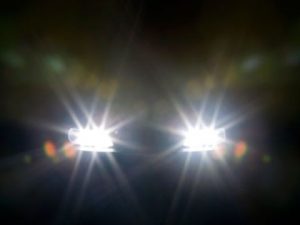 Lights on, engine sputtered. Lights off, no sputter. I left them off.

A friend followed me. She was my ride home in the likely event that the Dodge Colt stayed with Dad. But first, we needed to make it there. The challenge in my slow-drive plan came when cars began to zoom by, triggering my leadfoot. Yet somehow, I maintained a turtle’s pace.

Hands positioned at two and ten, driving in the right lane, pulling myself toward the windshield, working the manual transmission—nothing would stop me from reaching my destination. After passing the Beach Boulevard exit, under a darkening sky, I cruised along a downhill slant, grinning. We were making it.

And then something darted from the access road into my lane—a streak, fast and unrecognizable. I slammed the brakes and spun the steering wheel to the left. A man! headed into my path. With what seemed like superhuman strength, he took a flying leap toward the car. You know the sound of screeching tires and the crunching noise made upon impact? That’s what I heard, like a head-on collision with another vehicle.

Glass shattered but didn’t fall from the frame. Later, in Dad’s garage, I’d see the mosaic shape on the windshield. A nose, two eyes, two cheeks, like a mold of his face. Three black curly hairs stuck in the cracks highlighted with the faintest streak of red. Un-real.

After I tried to avoid hitting the running man, I found myself parked safely in the center-divide, wondering how I came to that place. The radio knobs had blown off, and the radio shifted inside the dash. No seat belt. No airbags. Rush hour in California, and I bolted across four lanes without looking. How did I not get pummeled like that man? And where did he go?

His body had flown over the Dodge Colt into the direct path of my friend. She swerved, narrowly missing him. Between sobs, she said, “He looked like a rubber man, with arms and legs flying off his body.” They found his shoes and his backpack in different lanes scattered along the freeway.

“He landed like a sack of rags and bounced,” said a witness, the same guy who swerved too late behind my friend. She overheard him talking to the police. “I felt a bump bump but kept driving to the exit. It’s like I didn’t get it until I reached the end of the ramp.” This guy drove around the freeway, re-entered, and returned to the scene to confess. He’d run over the man’s legs.

A flight for life helicopter landed on the interstate. With internal bleeding, a head injury, and multiple broken bones in his legs, they airlifted him out. Debris swirled everywhere.

Had to be a suicide run, the police decided. The man could have safely used the sidewalk on Beach Boulevard, under the freeway bridge, about thirty yards away. He had no logical reason to run across the interstate into oncoming traffic.

But what if he didn’t see the Dodge Colt with lights off?

I called Dad. He didn’t understand. “No, I didn’t hit a car, Dad. A man ran onto the freeway.”

I thought maybe to get to the other side, but I whispered, “I don’t know.”

Then Dad asked me as if he knew. “Were your headlights working?” I made a noise like a hiccup. “It’s  a good reason never to drink and drive. Even a sip,” Dad said.

“Good. Just don’t mention the issues with the car.”

“I won’t.” But the whole thing kept rolling through my mind. The guy appearing on the freeway—at first a streak and then a man, a human being. “But he dove into the car,” I said as my voice rippled and tears finally flowed,

← Art for the Soul The Basement →