Seagulls dive headfirst into the Pacific Ocean, a violent yet beautiful acrobatic show. Where the sky touches the sea, an island appears to float, a barrier between air and water barely visible through smog.

I sit outside on the balcony with a hot cup of coffee, listening to crashing waves, looking at Catalina Island, reminiscing about my last trip there, and the resident psychic who took a run at my pocketbook. The sun rises behind me, splashing muted orange and yellow bands of light like long gold fingers stretching over the sand.

Catalina is twenty-seven miles from shore. After a good rain, its sharp edges cut the sky, and a well-defined shape emerges. Today, she’s hazy because it rarely rains in southern California.

Throughout my childhood my family worried about earthquakes, not fires like we see now in Malibu. When did California start having a fire season? When the city of Orange caught fire a few years ago, ashes rained down on Sunset Beach, my home. 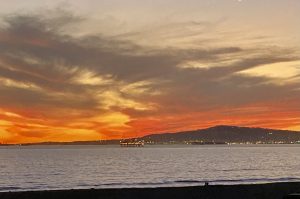 I’m still on the balcony, rocking in a chair, sipping lukewarm coffee. I know it’s Saturday, because the AA meeting is forming a circle on the sand in front of my house. On my right, facing north on a curve, the buildings of downtown Long Beach rise in tiny spikes. I’m far enough away to pinch the skyline between my fingers.

I’ve learned to ignore the oil rigs and the never-ending line of tankers in the ocean. I recall an early morning on jet skis, freezing in a loose wet suit, circling a fake island designed to cover an oil rig. That day, the water lay flat, no wind, no white caps. A friend stole me away from an early start at work, and we played in the ocean near the Queen Mary. I can see her now, three stacks rising north of the skyline, visually merging with the long cranes that extend from the docks. Not too long ago, my friends and I took a ghost tour on that ship.

To the south, from this distance, Huntington Beach pier looks like a matchstick, extending from the shore, flames smothered. Seven miles might as well be a hundred, it looks that far away. I gulp the remainder of my coffee, cold and stale.

Clapping from the AA meeting returns my attention to their circle and beyond, just in time for me to witness another seagull plunge into the ocean.