Roni works from home when she’s not traveling. It’s a lifestyle that allows for freedom but entails longer work hours. But she’ll deny that. Even when she’s not actively on a call or getting ready for a meeting, the wheels in her brain are churning, usually about work. I should know—as one of the streaming voices in her head, I witness it daily. It’s like a steam engine on overdrive with no brakes (literally, no breaks).

Roni, slow down, we say. She doesn’t listen until it’s too late, like the time she slammed into an open cupboard and nearly broke her leg and then whispered our words to herself, “Roni, slow down.”

Duh! We know her well. The problem is she gets lost in her head and becomes oblivious. We laughed our asses off about the Trader Joe’s incident. We thought for sure Roni would laugh with us. We waited to hear her laughter. When she didn’t even chuckle, it freaked us out.

Trader Joe’s is located five minutes from Roni’s house, but only if you don’t get stuck at the traffic light on Warner Avenue and Pacific Coast Highway. Waiting for the signal to change can easily add another four minutes to the roundtrip. Roni had approximately twenty-minutes before her next teleconference. She decided to rush to Trader Joe’s, purchase her favorite beet and goat cheese salad and race home in time to dial-in to the meeting. 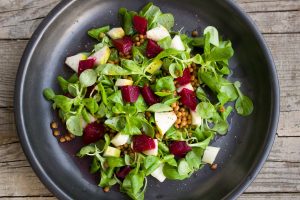 She grabbed her cell phone, her purse, and ran downstairs, not realizing she had forgotten her car key until she walked into the garage and couldn’t find it in her bag. She ran back upstairs and tore apart the kitchen. Slow down! Check your pocket.

Aha! Car key found. She ran downstairs again, hopped in the car, maneuvered her way around the trashcans, and off she went. Eighteen-minutes to launch.

“Crap.” The traffic light turned yellow, and the slowest Honda Odyssey in the world braked in front of her. Stuck at the light, she checked her phone. A reminder popped up about the meeting. Her neck muscles tightened. Greenlight, go! We were all in because her mad-dashing behavior affected all of us.

But that dirty Odyssey chugged along at a snail’s pace, and Roni started driving bat-shit crazy. She passed the Honda and then cut him off. Fourteen-minutes left. We were buzzing on high alert, cheering Roni along. You just get swept up sometimes. She’s that contagious.

She stepped inside Trader Joe’s with a little less then thirteen-minutes remaining on the clock. Her heart pounded triple time as she hustled to the produce area. No beet and goat cheese salad—we noticed that immediately. She did not.

A woman, frail with wrinkles and white hair, sitting in a scooter, blocked the pre-made salad area. Roni took a deep breath and captured the older woman’s calmer energy. It helped. With her pulse slowing, Roni checked every salad—searching for the only reason she’d come to Trader Joe’s. We tried to tell her. It’s not there!

She lost a full minute in contemplation. Then she began looking for her second favorite salad—spinach, walnut, blue cheese crumbles, and raspberry vinaigrette—there it was, on the other side of the older woman on the scooter and not within reach. Be kind, we said to Roni. Patience.

Roni thought he had addressed the old lady on the scooter, and so did we. All of us kept our sights locked on that salad, waiting for the woman to scooter out of the way.

Roni, sandwiched between his gut and the scooter, lost in thought about the salad she couldn’t reach, heard him but didn’t really listen until his tone shifted. “I said, ex-cuse me.”

Suddenly aware he had addressed her, and having no control over her mouth, Roni said, “Somebody’s having a bad day.”

He reached outward toward a rack of veggies, forcing Roni to step aside. “I told you, ex-cuse me three times. You didn’t move.” His deep voice carried through the store while his meaty hand grabbed a bag of baby carrots.

“You’re really having a bad day, aren’t you?” she said. He spun away just as Roni mumbled, “So rude.”

That stopped him cold. His reddening cheeks puffed out. He jabbed the air with his chin and waved the bag of baby carrots. “No, you’re rude.”

People scurried past them. Grandma scootered away. The big man got louder. Somehow the conflict evolved into a full-blown shouting match.

Did we mention the size of that man? Huge!

Roni recognized the stupidity of the exchange. She had less than ten minutes. She grabbed the salad and walked away. Shoppers parted like the sea, scattering as if she would attack them next. But it was his fault—she wanted to say.

Manny, the cashier, rushed her along. Did she see fear in his eyes? Oh my god, in the parking lot people darted out of her way as if she were an active shooter. We loved that ride! It was hilarious. Seemed like Roni had some type of superpower. She actually made it home in time for the teleconference. Bravo!

Afterward, she over-analyzed the situation, thinking she’d never be able to show her face at Trader Joe’s again—as if  WANTED posters would be displayed, and everybody would know about the salad-woman gone mad. She fell into a deep funk, swearing she’d never tell a soul. She almost took us with her in that downward spiral. We protested. Do something, we yelled. Take action!

After swimming in a puddle of regret all day, Roni called her mom about an unrelated topic. We knew she had no intention of sharing the incident. But damn, we wanted relief, and she needed to release. We pushed, tell her about Trader Joe’s!

It came to Roni as an afterthought. “Oh yeah, listen to this . . .” she said. Every detail spilled out, and again it felt like she had no control over her mouth. But it felt so good to let it go.

Her mom laughed so loud it stunned Roni. It took a few beats, and then Roni started to laugh with her. Together, all of us rolled in it for a few seconds—a cloud of laughter.

“Cool,” her mom said. “I wish I had that kind of super power. I’d go grocery shopping more often.”

← An Abundant World Lights Off →